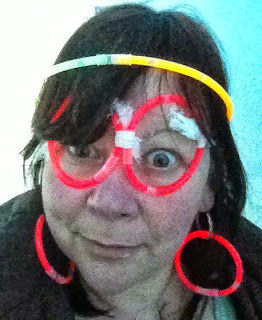 The florist. The one that tidies up (when I feel like it); the one that barks the orders (never really sure at whom); the one you will see if you come into the shop the days I am working - every day then :), the one that is in charge of keeping this blog up to date (don't shout at me if I wane a little at times).

I've no idea how I got into floristry, my plan was always to be a secretary, my poor Dad even worked overtime and saved up to buy me a decent typewriter so I could take my RSA exams. You can imagine the shock on his and my Mum’s face when I went home after a school careers meeting to tell them I was going to be a florist. Actually you should have seen the look on my face when I told the man asking me what I wanted to do. I had no idea what a florist did. I had never even stepped foot into a florists and to this day I still have no idea how I came to be where I am. I'd gone into the meeting to discuss going to secretarial college. The man looked at me and uttered the words "So what do you want to do when you leave?" I replied, without any pause or hesitation "I want to be a florist". Before I left the meeting an appointment had been set up for me to get a college place at Sparsholt College of Agriculture in their floristry department. The very next day (a Thursday) my Grandmother went into a shop round the corner from where she lived in Portsmouth to order some flowers and happened to mention that her granddaughter wanted to be a florist. That is how I found myself the following Saturday morning catching a bus down for an interview. I left at 5.30 that evening having completed my first full day as a trainee and I've never really looked back since.

I attended college for 2 days a week and worked for 4 days a week (5 at peak times) in my first year of training. In the second year I attended college for only 1 day working for 5 each week in what was, and still is, one of the busiest shops on the South Coast. I almost quit during that first year, my bosses wouldn't allow me to touch flowers unless I was stripping leaves from them, cutting their stems and putting them in water; they certainly wouldn't let me make anything while I was still a trainee. My first year tutor and I really didn't see eye to eye, in fact she was downright nasty to me, but I stuck with it (I've never been one to quit when the going gets tough). Thankfully in the second year she was replaced with a wonderful teacher who was also a world award winning florist. Her encouragement was instrumental in making me the florist I am today. She actually offered me a job just a month after I started a new job paying 5 times the amount my new employer was - while I appreciated what a great teacher she had been I felt as an employer things might not have worked out quite so well - it turns out I made a wise choice (I moved on from where I completed my training once I was fully qualified).

Upon qualifying (with distinction) in all my exams, a chance conversation between my Dad and one of his work colleagues led to me being offered a job at one of the best florist shops in the South. For the first time since I started out in my career I was not only allowed to work with flowers, I was actively encouraged to experiment. I stayed in that job for 9 years loving every single second of it. My boss was amazing and thanks to her I was able to help in the preparing and displaying flowers at the Chelsea Flower show for many years running. She also made me enter any and every competition that was available for which I was awarded numerous gold medals, as well as getting me to teach junior florists at the quarterly florist meetings that we used to attend. I learned so much working for, and alongside her; I also got to meet, and work with some of the best florists this country had to offer. The decision to leave her was the hardest I have ever had to make, but I had reached the stage where I couldn't go any further in my career,  so for 18 months I walked away from floristry completely. I worked in several different jobs including a factory and a cheap retail shop, but then the urge for flowers started to pull at me so strongly that I knew I had to get back to it. Originally upon returning to my vocation I ended up back in the very shop where it all began. I stayed there again for 2 years before being offered a job with a wonderful lady in a small village on the outskirts of Waterlooville. I loved every second of every day that I was there, but then tragedy struck, she was forced to retire, as a result she had to sell the shop. It was sold to two women that knew nothing about the business, who weren't florists and who thought that "playing with flowers" all day would be fun. That’s when I knew it was time to go I found myself moaning down the pub with one of my best friends over a pint or 4, telling him I couldn't stay there any longer and had to get out. That was the night we went into partnership and I've not looked back since (although I'm sure he has when I make him work weekends to deliver/setup the weddings). The move to Fareham (the place I was born and raised) has been like all my dreams come true. Business is wonderful, my customers are the best around, and I absolutely love getting up in the mornings (yes even the 4am starts) to come to work. Who would have thought those 6 random words 32 years ago, back at that school meeting would lead me to where I am today? 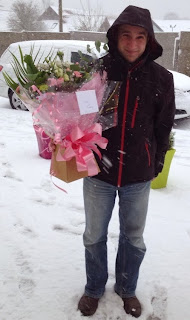 The man that made it all happen; the one who gets moaned at on a daily basis; the website designer and all round general good guy (occasionally!!).

Even now he still has no clue about flowers (although he can now tell a carnation from a chrysanthemum); that's ok though; as long as he sorts the rubbish and is willing to battle the cobwebs in the loft, we'll keep him around a bit longer!

He's responsible for the upkeep of our fantastic website (that he designed) and the one that keeps me in check when I get a bit carried away with things. He's not a florist and never will be. He owns a computer support company for small businesses, which is how he has ended up being the shops website designer. They work out of a small office at the back of the shop premises so is on hand to help out in the shop as and when I need him to. 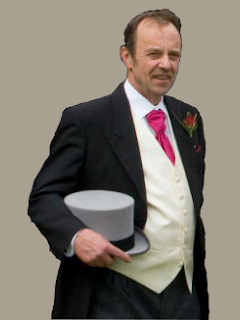 (He's a little camera shy, as you can tell!)

If you want it delivered, he's the man who will knock on the door with a smile on his face (every time) and deliver to you, your friends, family and anyone else you may wish to send flowers to (he's been known to sing on occasions as well - not sure if that is a good, or bad thing :) ) He's also pretty nifty at making hand tied bouquets (don't let on I said that out loud!)

The man I send off to set up at wedding venues, which he can now do with his eyes closed (he's had plenty of practice).

.... and then there's Vlad; a most important member of the team, who seems to get more people talk to him than the rest of us put together - yes, sometimes he also scares people a wee bit too at times :O)