I do wonder "is it really worth it?" any more.

For the most part, the people who walk into the shop are lovely; of course there are those who can be a little annoying, others who think they are funny when really they are anything but. People, who like you and I, are just going about their lives, treating those they interact with in the nicest way they can.

Then, there is the "other" group of people, the ones - who sadly - are increasing with each day that passes us by. The "I WANT" group. They will enter the shop with a certain swagger, or with their phoned glued to their ear more-often-than-not slopping their chops on a piece of chewing gum. They make no eye contact, and they start with either "I want" or "I need". There's no manners to them, no "Please may I have?" or "do you happen to have?". They dive straight in, the entitled who think they have the right to demand you do exactly what they want, when they want it.

Had they made any effort to pay any kind of attention, they would have seen the A3 sign in the shop doorway, specifically placed at eye level, using bright colours to try and attract their attention. Of course, they have their heads so far up their own backsides they pay no mind to anything, other than themselves, their needs, their wants. Those whose phones ring whilst I am serving them who then choose to completely ignore me so they can answer their phone also are quite rude; people do that to me so often these days. Please don't. I really don't need to hear you chatting to someone about your mate who's tested positive for an STI, and I definitely don't want to know your latest conquest is. If I'm giving you my time and attention to serve you, please show me a little respect and call your people back once you have left the shop.

Just this morning I have had 3 from "I want" group - I knew today was going to be one-of-those-days when a 20-something with earbuds in, eyes glued to her phone stepped straight into the road in front of me as I was on my way to the shop; she then had the gall to have a go at me for scaring her when I beeped. Next time I'll not bother to break/swerve and will instead just run her over. I'm pretty sure she would fall into the "other" group if she were to enter the shop. The first of my 3 (if any of you are reading this maybe you might want to think about how you speak to/treat people) came in, having read the sign, phone glued to his ear, jabbering away with whomever was on the other line. He chucked a £10 note down on the counter and carried on his conversation. I stood there, waiting, not sure if the £10 was for me to treat myself to a bottle of wine, fish-and-chip dinner later, or to keep me in Yorkshire tea bags for a few more weeks. I'm good at a lot of things, yet still struggle when it comes to mind-reading.

The guy walked around my shop, still on his phone, still not making any kind of eye contact with me. I wasn't sure if I should wait for him to finish his call, or carry on with what I had been doing. I waited a good 3 or 4 minutes (which doesn't sound like much but really is when you're not sure what you should be doing) before he looked at me and said "is it ready yet?"  I didn't even get chance to reply as he went straight back to his conversation. I don't know about you but I was brought up by parents who told me you "never interrupt" someone, so I stood there a little longer until I eventually caught his eye, at which point I opened my hands outwards in a "what do you want?" gesture. He looked at me, said "flowers, wrapped up, there's the tenner" and continued with his conversation.

I made him up a small bouquet, rang his money in the till, walked it into the shop, popped it on the side, tapped him on the arm, pointed to it, turned my back and walked away from him. Not very polite, in fact quite rude of me, but perfectly justified I believe. He grabbed them halfway up, practically crushing them, flung the door open and wandered off.

In between him and the next I had another person in. She too told me she didn't have time to wait, however, we ended up wasting the time she did have as she tried to decide what flowers/colours she wanted. The next lady through the door was also on her way somewhere so required something straight away; originally she wanted in water but when I explained they took a little longer she did agree to have without and in the end we got her on her way within 6 minutes; she was lovely and really liked what she'd received. I thought then the day was going to get better. Silly me.

Next in was a gent who wanted a single red flower. I don't have any today, red isn't a colour I stock. I did have some red roses in a vase on the workbench, however they were there for me to make up an order for someone collecting later in the day so I was unable to sell him any. He wasn't that happy about it but I did point him in the direction of someone else who may have been able to help him.

Then came the customer who prompted this blog post; the customer who is now making me seriously consider locking the shop door again, going back to working how I did during the Covid lockdowns. I can then control who I let into the shop; if they want something for the same day I can turn them away before they enter the shop (unless I know I have what they require).

"I want one of them bouquets in water to take away with me". he said as he got to the counter.

That was fine, I could make one without a problem, or so I thought, until I replied "Not a problem at all, it will take me about 15 minutes to do that for you; is there any particular colour or flower you would like?".

The reply was "I don't have 15 minutes; I want one to take away with me now".

I possibly could have made one within 10 minutes but any quicker than that was really not likely to happen. Explaining 10/15 really was the quickest I could do, I was told "I'll take this one then".

The person proceeded to pick up a bouquet I had waiting on-the-side for another of my customers who was due to collect in the next 30 minutes. The person then tried to shove said bouquet on to the serving counter, which they were not able to do due to the Perspex screen we still have in place; their shoving resulted in the bouquet being knocked of out of their hand where it crashed to the floor. Instead of an apology I got told "well, I don't want that one now".

I wanted to swear, as I am sure you can imagine; however, I kept my cool, walked round to pick it up and was polite as I said "not to worry; the screen catches a lot of people out" before adding "obviously I'm going to have to remake this now for my customer who is collecting in a minute, so you will have to wait a little longer for me to make something up for you".

The reply I received was "you're some kind of c**t you, taking the f**king p**s out of me. Well F**k you; I'll get a bunch in the supermarket". With that it left the shop slamming the door behind it.

I've no idea when people became so impatient, so rude, and so entitled. I've been doing this job 35 years and when I first started people were never like it. Until just a few years ago I'd only ever had run-ins with 2 people whilst I was at work, and back in the 'early days' of my career you didn't have every-other-shop, petrol station or clothes shop selling flowers. We would see 5 or 6 times the amount of people inside than we do now. I've dealt with tens of thousands of people throughout my career yet in the past couple of years more-and-more are behaving as if they world owes them a favour. It really is quite disconcerting.

I read somewhere earlier this is #bekind week. It would be so nice if maybe some of you (not all of you as the majority of you are all wonderful) were to maybe take notice and give it a try. Don't make me lock my doors. 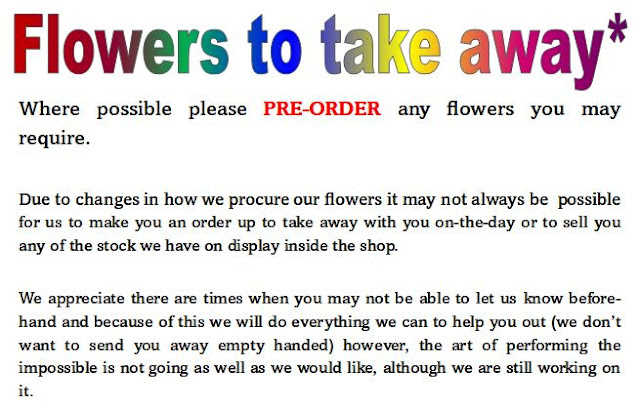 Posted by Flowers by Moonstones at 11:37 No comments:

In an English country, garden

This bouquet reminded me of the countryside and beautiful cottage gardens.⁣ 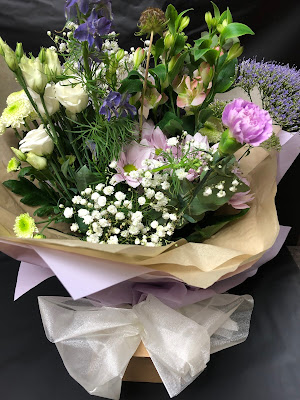 Posted by Flowers by Moonstones at 14:45 No comments:

Tweets by FarehamFlorist
Check out Flowers By Moonstones on Yelp