Multiple people overnight and this morning have sent me links, newspaper articles and told me that from Monday 12th April retail shops may stay open until 10pm (I never knew they couldn't in the first place!!) ⁣⁣⁣

⁣⁣⁣I'm getting in early and letting you all know today that from Monday 12th April the shops opening times will be.⁣⁣⁣

you will notice these are exactly as they were before 🤣🤣⁣⁣⁣ 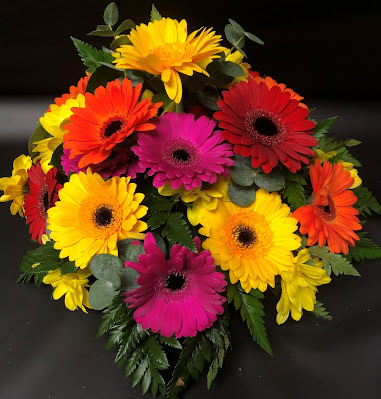 Posted by Flowers by Moonstones at 09:31 No comments:

I remember the week leading up to Mother's Day last year (it fell on Sunday 22nd in 2020, a week earlier than this year) and Clive and I having a chat about how we thought it might be an idea to close down for 2 weeks, as the chatter about covid seemed to be intensifying. Finally, we made the decision to shut after all deliveries and collections had been made on Mother's Day, and not re-open for 2 weeks after. We knew so little about how the disease was transmitted back then, and had not heard of anyone who'd been infected (sadly, this has since changed; I personally know a lot of people who have had it (some were really poorly with it, others got away with just feeling a bit "off" for a few days). I also know of several people who have lost their loved ones due to covid; some whom were fit and healthy with no underlying issues. My heart breaks for everyone who's suffered as a result of this. We planned a deep clean of the shop (I'd been steralising everything to the max as it was, which (as those of you who know me) is not really me in any way, shape or form)) and maybe we'd even redecorate ready for when we were going to open the doors again on the 5th April.

At 5pm, on Friday 20th, Boris decided he would follow our lead, and shut the whole country down - for 3 weeks, or so we all thought at-the-time. We all know what's happened since then, and here we are, almost a year later and so many businesses are still not open and operating, although I have to admit I've not noticed any real difference in a lot of areas since the Christmas lock down began. Traffic is as heavy as it's always been, the building site opposite has continued, and me and my little shop are surrounded most days by people constantly coming-and-going, and a lot of people around our area are all stepping out with new haircuts - haircuts that have definitely not been done at home with a set of clippers (this does annoy me when so many are adhering to the rules (as we have in the shop) to find other's think it ok to flout them). I feel for my lovely neighbours in the barber / beauty salon directly next door, and the girls in the hairdressers over-the-road in the main parade, doing it by the book, when other's are not, but I'm not in charge of who does what or policing such issues so I come in, do what I've got to do and go home again. I've even given up having a moan at the builders and my other neighbours in the turkish barbers, the new food place being built next to that, and the chippy lot, from parking all their vehicles directly outside on my forecourt (I had to climb over one the other day to get out of the door). Sadly, it's just me on my own up here these days (for now at least; everyone else will be back on Monday 12th April 😁😁😁) and I can't be bothered with hassle of dealing with them all.

Anyway, enough of all that, last Mother's Day was strange because I knew I would be closing the next day, this one was strange because I wasn't able to let anyone into the shop to place/collect their orders. Having said that, for me on a personal working level, it sure made it easier not having to think about where I could put things so they weren't in the way of customers. You never know; I may implement a similar system next year 😁

I had a feeling this year was going to be busy; so many people unable to visit their Mum's, it seemed to me the most logical thing for them to do would be to send flowers, so I got myself organised. I put it out on our website, and all our social media, that I would not be able to guarantee specific flowers if orders had not be put in to me by the 9th (the Tuesday before). This was partly because my wholesalers needed me to pre-order anything I wanted or they wouldn't be able to guarantee me anything. The Monday evening (the 8th) I sat and went through every order I had placed for the Friday, Saturday and Sunday. I also had to look at the orders I had for the Monday (today) and Tuesday after, because you can almost 100% guarantee there is very little to purchase from the markets on those days after a busy event. That evening I worked my way through over a hundred orders, making sure I ordered everything I needed. I then looked at previous years to see how many orders came in late, and added enough extra flowers to my order to cover late comers. I thought I had ordered more-than-enough. I realised on that Tuesday evening, after my order had been put into the wholesalers, I'd not ordered anywhere near enough. I had orders coming through our online system in amounts I have never seen before. At that point, I also realised there was no way the drivers were going to be able to get all the orders for Sunday delivered in the morning - something we always like to do; partly because it's nice for your Mum's to have their flowers in the morning, and partly because we have Mum's too - so I took Sunday out the equation for a delivery date. By Wednesday I had to take Friday and Saturday off too. The demand this year was just phenomenal. Had I been able to get another florist in to help with the workload (I worked more hours last week, then I did in almost the whole month of Feb) and another 4 drivers, I could have easily have supplied double the amount that I ended up doing.

I hate to say "no" to someone when they call to place an order. It's not good for business to have to turn people away, but on Thursday that's all I found myself doing, and whilst Thursday was a little late to be thinking about placing an order, it's usually not an issue. I don't normally say "No" to anyone until late on Saturday afternoon. Friday, I managed to source an additional delivery to come in on Saturday morning, so put out on social media that I was able to take more orders (this meant working well into the wee small hours when really only the naughty little elves and pixies should be out - usually creating mischief) and within 1 hour I had to remove the posts from everything, as I was deluged with an influx of orders and the flowers from the additional delivery were then allocated elsewhere.

To those of you I had to turn down, I am sorry, but please, I ask every year, do not leave it until the last minute. I know we all have other things to be thinking of, but telling me "I've been meaning to call you for the last 2 weeks" on the Sunday morning, and expecting me to be able to produce a specific flower for you doesn't mean I'm going to be able to help you. To those of you who said (and there were quite a few) "I didn't want to order earlier as I wanted to have fresh flowers" it really doesn't work like that. Yes, I placed the order for the flowers I needed on the Monday evening, but the flowers themselves didn't come in until the day I needed to make them to go out and be delivered. I've built my business up by providing the freshest flowers I can possibly get for you. I know some shops will get them in the weekend before and then just top-up as the week goes on, and if that's what works for them, then great; that's not how I work though. Even on a quiet week nothing is in our shop longer than 48 hours.

To those of you who had a moan that you got your flowers on the Saturday, instead of the Sunday (again, there were a few) please be aware this was for one of two reasons. Reason one is that we were asked to deliver on the Saturday; quite a few people wanted their orders that day so their Mum's had them to enjoy all day on the Sunday. The other reason, I'm afraid, is that your loved one left it too late to place their order and Sunday was no longer an option for your flowers to be delivered. You know your children. You'll know if you fall into Reason one, or, reason two 😳

I can't thank you all enough though for making this a good weekend for our little business. It's nice to know that this month, at least, I can pay the bills on time. Next month? Well, we'll wait and see what it has in store for us. I assure you that next year I will double the order I put in this year, and hopefully, if I can, I'll try to find someone who can come and help me make the orders up - either that or I'll order a truck load of red bull to help keep me alert, and aspirin to help my middle-aged body deal with all it's aches and pains; it's not all about "playing with flowers" for an hour-or-two each day.

The shop is still not sorted and hasn't been redecorated, but hey, those 357 days since I made such plans have been the craziest of my time on this earth. Maybe by this-time-next-year 😂 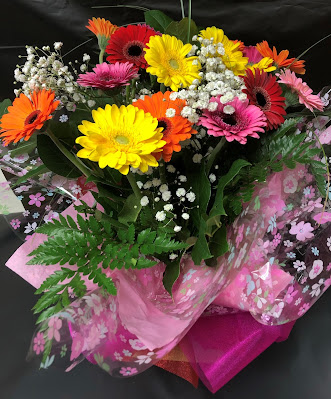 Posted by Flowers by Moonstones at 12:57 No comments: