I made a mistake

I'm always proud and willing to share with you all when I make something a little different, or feel something went really well. I'm happy to share with you when a customer calls me, sends me a lovely email, or a beautiful card to say "thank you". As a result of this, it's only fair that I share when I get it wrong. And this week, I have made a mistake.
When I take an order in the shop or over the phone, I do so on an order pad (I used to write in a book/diary until the new GDPR rules came in and I was unable to do so any more in case a customer was able to see another customers details) hence why orders now go onto a pad. Each customer has their own sheet, and the sheet gets turned for the next so nobody but myself gets to see. Those orders then get put onto the computer system we run, which is encrypted and coded, and goodness knows what else (password and phone code protected to) so that only I can access them, where I can view them as I would a calendar. Each customer has their own line and then an entry where I pop their order details. I am also able to attach the photo's I take. Before adding to my calendar the delivery details are popped onto a separate system for the drivers - both they, and I, have access to the delivery list, which is handy as they will note if they've had to leave flowers elsewhere, and means if a customer calls to see if delivery has been made I am able to check whilst they are on the phone to see if there were any issues with the delivery.
Once an order has been copied, I strike a line through the order so I know I have done it, discard any personal details and secure the order into a lock box until after delivery has been made when it then gets destroyed (it's always good to have a back-up plan in case the computer system went down).
Online orders are slightly different - although still very similar. With an online order they are run through a secure server provided by an authorised company who have their own PCI compliance (something all businesses need to be registered for if they are taking customer details) as well as running alongside ours. Again, for me to access the order I have to go through a secure server and security checks. I don't see/receive any of the customers payment details.
I'm unable to strike a line through online orders copied to our calendar system, so I ensure I never close the page down until I have transferred all the details manually. I start with the delivery sheets first (as I've been known to not put those on for the drivers in the past and upset them (on more-than-one-occasion) when they've come in to see another dozen orders waiting for them that they knew nothing about)). I then type up a confirmation for the customer which I email over to them before copying the full order onto my calendar.
On Tuesday of last week, an order came in for the Saturday - I had several others come in that day too, and proceeded to work my way through adding them to the correct lists/calendars.  I never thought any more of them after they were all copied over and got on with my week where I sent out over 180 orders - all successfully.
Fast forward to Monday morning and I received a phone call from a gentleman who had placed his order online, to ask me why the flowers had not been delivered. There are no words to describe how mortified I was when I realised I had let down a customer. I'd emailed confirmation to the gentleman who placed the order, was able to pull it up on my screen to see which day the order came in, yet somehow it was not (is not) to be found on my calendar, nor is it on the drivers sheet. The oddest thing though is that when I placed my wholesale order for the flowers to come Saturday (the day the order should have been delivered) I had added all the flowers needed to make the order up. For this to be I had to have noted down what was needed when the order came in and I viewed it, then I popped the flowers required onto my pre-order list in anticipation.
I'm human, mistakes happen, yet that is not an acceptable reason, most definitely not an excuse, and it doesn't change the fact that I made a big mistake; I let a customer, and his wife, down.
I cannot tell you how very grateful I am that the gentleman who placed the order, when he called to tell me it had not been delivered, was so kind to me. He had every right to be angry, and rip into me for it. He never, and that says so much about his character and what a kind person he is. I apologised profusely, and between us we agreed a way to put right the wrong I had done.
It's not my first mistake; a while back I put an order on the system twice - 2 consecutive weekends running (delivering the first lot a week early) but I sure do hope it's my last for a very, very, very long time.
All those successful deliveries, all those "thank you's" from other customers pale into significance right now, because whilst I got so many right, I got one wrong, and that is one more than I should have.
So, there you go; it's not all moonlight and music, and I do not always get to feel proud.
Posted by Flowers by Moonstones at 13:19 No comments: 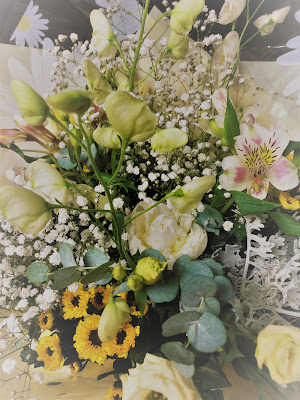 Posted by Flowers by Moonstones at 11:03 No comments:

A hatbox of Red Roses 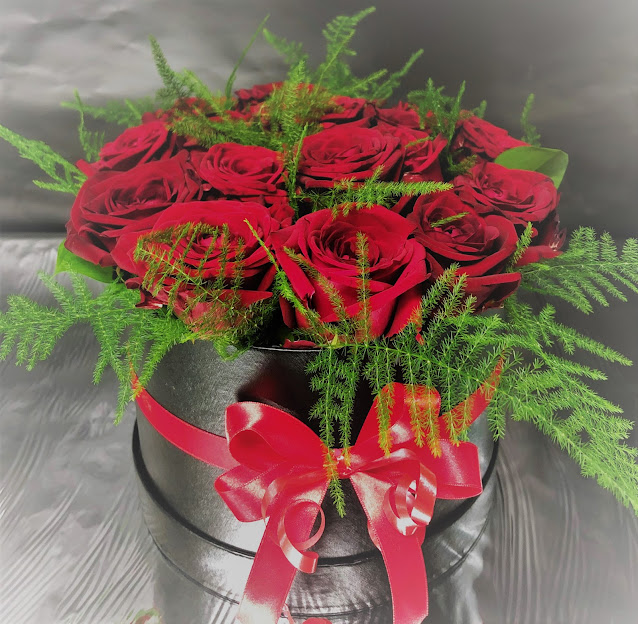 Posted by Flowers by Moonstones at 12:13 No comments:

Thought I'd share a few of the flowers I've had in today as they sit in their vases, rather than a made-up item.  ⁣

I do have the best job 😁⁣

Posted by Flowers by Moonstones at 09:53 No comments:

Gone fishing ⁣
⁣
sadly not for a happy occasion but a great tribute for a fisherman. ⁣
⁣ 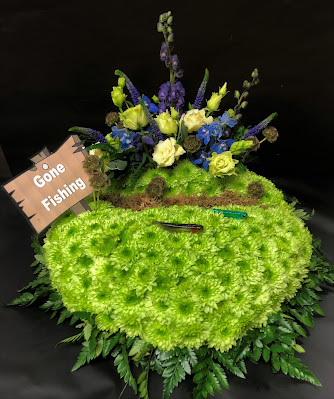 Posted by Flowers by Moonstones at 15:43 No comments:

So much gorgeousness in one go. Simply beautiful peonies, roses and scabious seed heads. ⁣⁣
⁣⁣
I'd have quite liked to keep these for myself. ⁣⁣ 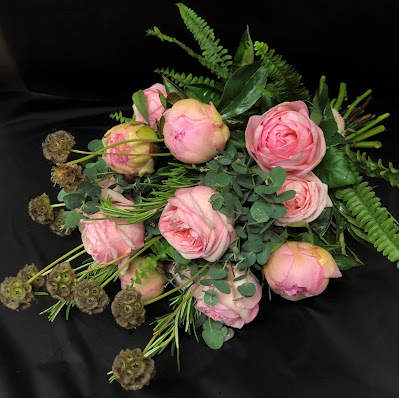 Posted by Flowers by Moonstones at 12:37 No comments:

34 years as a florist (I know, I was really young when I started!!) and yesterday I made my first ever baseball cap. ⁣⁣⁣
⁣⁣⁣
It wasn't for a Boston Red Sox fan, but what's a girl to do when she's got a red cap in front of her? ⁣⁣⁣
⁣⁣⁣ 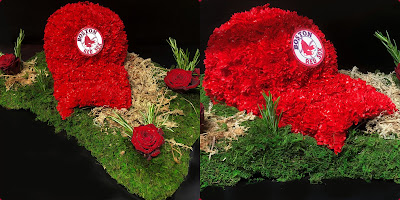 Whilst it may be more 'traditional' for an anchor to be made in blue & white, or Red, White and Blue, I love how the family who ordered this tribute combined the gentlemans love of the sea and favourite football team to make it more personal.  When it comes to flowers/colours we are limited only by our imagination. 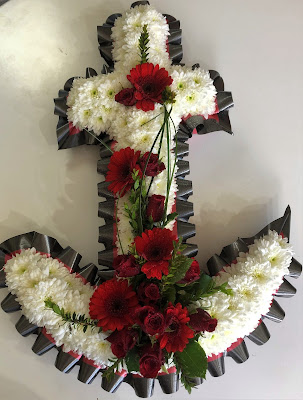 Order online or by telephone 01329 8459457 for next day delivery
(same day possible on occasions - dependant on stock levels).

Posted by Flowers by Moonstones at 11:40 No comments:

We are now OPEN again for you to be able to come into the shop (please note we have reduced our opening hours slightly - these are adaptable though so please do not be afraid to ask if you wish to collect a bit later than we are open).
We have followed all government guidelines and directives and I have re-written our risk assessment to include Covid-19 and social distancing (if you've ever had to do one of these you'll know why I have so many more grey hairs than I did before lock down).
The shop has been completely re-arranged to create more space, and everything has been sterilised to within an inch of it's life.
Please be aware though that there are still restrictions in place. Only 2 people (if from the same family) may be in the shop at any one time; if you are not from same family and someone is already inside, please wait outside (keeping to social distancing rules) until the present customer has left. Also, please allow me time to clean down the customer area, and door handles, ready for you to enter safely.
At this time you will not be able to pick your own flowers (although you are free to tell me which ones you would like me to use in your orders). Where possible, please PRE-ORDER your flowers; I may not be able to accommodate you if you just turn up wanting something made there-and-then (although, as always, I will do my very best for you).
We have antibacterial sanitiser available to use if you wish; please read the labels if you think you may be allergic to any of the ingredients. We will not be held responsible should an allergic reaction or injury occur to you through using the bottle we have provided.
We have put measures into place to keep all of us (ourselves, as well as you) as safe as can be, however, we hope you will also have done all you can to keep yourselves (and us, in turn) safe too. We are, after all, in this together.
If you wish to place an order online you may do so 24 hours per day (although I only pick them up during our opening hours). You may also email, message or telephone your orders through (again these will only be answered during our opening hours). These are, obviously, the safest ways to place your order.
Please do not feel that because we are able to open the doors, that you are obliged to come down to the shop to place an order with us.
We cannot thank you enough for your continued custom and support throughout what has been a very difficult and trying time for us all. It's not over yet but hopefully, together, we can all come out of this safe and healthy. 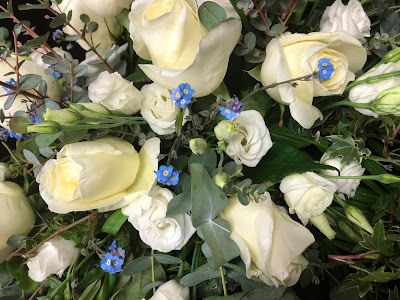 Order online or by telephone 01329 8459457 for next day delivery
(same day possible on occasions - dependant on stock levels).

Posted by Flowers by Moonstones at 11:13 No comments: