April 02, 2019
"I see you managed to fudge up, big time" were the words uttered to me from a fellow florist (actually, that's not quite true; the word "fudge" was something else but I had to change it as this blog is visible to younglings who should not be reading such words!!).

Their comment was in regards to Mothers Day (or Mothering Sunday as I was very sternly informed by one of my regular customers) and my having to turn away orders on the Friday before due to a lack of flowers - on that day I wasn't sure I was going to be able to get any more, either. I understood where they were coming from, and what they meant when they said it to me, however, I'm not entirely sure it was a justified comment. Did I really get it wrong?

I've always taken pride in the fact that I do everything I can to ensure any flowers we have for sale in the shop, or send out on deliveries, are as fresh as they can possibly be. I am lucky (as all of us along the south coast are - and quite a few further inland too) to be able to buy every-single-day. There are a multitude of wholesalers for us to choose from, all of whom will deliver to us Mon-Sat (on Sundays during peak periods). Several we have to place our orders with by 12 noon for next day delivery (this can be a bit of a pain if we have a customer in at 4 who needs a certain flower for the next day - of course, the ideal situation would be for our customers to give us a bit more notice :) ) and another (who I use more than the others because they are the only ones of them all to never let me down) who I can order right up until midnight with; those flowers are usually in my shop by 8 am the following morning. However, the reason I can order until midnight with them is because they won't guarantee any flowers for me next day. I can check to see if they have them coming in though, so it's a situation which works well, and I am able to tell my customer there-and-then, whether I can definitely get the flowers they are wanting.

Now, this is where I differ from a lot of my florist friends, for even at busy/peak times, I still buy in the same way, whereas they (I can only speak for friends of mine in the business, and not other shops/businesses in the area) will buy their flowers at the beginning of the week. Some had theirs in on the Monday, most had theirs Tuesday/Wednesday. If that's what works for them then that's what works, I just couldn't do that. Aside from the fact I don't have room to store so much stock (I struggle with space buying day-to-day) I could not send out flowers to someone on Sunday that I know came in on the Monday before. I am not knocking anyone who has done (for they're the ones who didn't lose business this week and will most likely be getting paid) it's just not the way I operate. That's how I found myself in a blind panic towards the of last week.

Brexit never happened (thank goodness; I can only imagine what chaos would have been abundant if it had done this weekend) but that didn't stop the customs officers on the continent from causing no end of issues. They are over there, doing what they're doing and it's none of my business why, however, I wish they'd not been doing it, for I found myself in the situation where the flowers I ordered, which should have been sitting in my shop, were still sitting the other side of the English Channel. I knew that I would receive everything I had pre-ordered (they'd arrive extremely late, but would arrive). What I didn't know I was whether I would be able to get any extras to stock the shop for all those who had left it late to order. This is where my fellow florist was basically telling me I had failed, for on Thursday and Friday I was having to turn away customers. Some (thankfully) understood and were lovely about it; some waited until Saturday to see if I had any extras, which by that time I did, so still placed an order with me. Some took the numbers of other shops I gave them and I guess called those shops and got themselves sorted (yes, I sent customers to other local businesses - this is something I have always done; if I haven't got what someone wants I still believe I have an obligation to help them source what it is they require and will direct them towards other's I know who may be able to help). Of course there were some who were not happy. One lady who came in late on Friday was so incensed she slammed the door behind her as she left so hard it bounced back open again - that's a pretty impressive feat with our door. I also had a couple of customers who I ask every time I see them to give me notice if they want someone specific both of whom came in late on Friday and who were then very "iffy" with me because I had to turn them away; it's not a nice feeling when someone treats me that way because I do all I can to ensure my customers are always treated with respect and will go out-of-my-way for them, but it-is-what-it-is. I have no control over someone else's attitude. I went home feeling thoroughly deflated on Friday night, because whilst it was an inconvenience to those people I had to turn away, it was so much more than that to me.

2 days of not being able to trade means I don't get paid for all the hours I worked in March (not just the extra, but the everyday ones too). 2 days of not being able to trade meant I sent customers to others; those people will never come back. 2 days of not being able to trade meant I had to constantly keep apologising for something which was totally out of my control. Mother's Day (Mothering Sunday) is our busiest trading time of the year; to not be able to trade for 2 of those days has had a major impact on the business. However, having dealt with the additional stress, working for nothing, putting up with people being rude to me, I would not change a thing. You see, I would rather lose those customers before the event because I didn't have (couldn't get) what they required, than lose them, the person we were delivering to (and anyone else they may diss us too) after the event, when the flowers which have been received haven't lasted as they should because they weren't fresh in the first place. I have never (and will never) compromise on quality for the sake of a few extra pounds in my till, and a wage slip in my hand at the end of the month. That is not my business ethos. 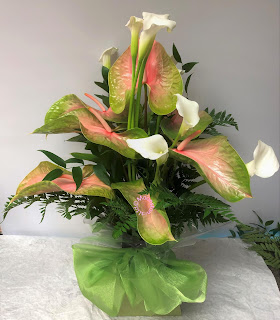 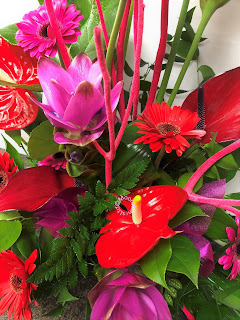 On another note I was blessed with being able to work with some fabulous flowers (when I had them!!) and there were 2 in particular that really stood out to me. The colours in the one above - so vibrant, so different and I've already had a wonderful "Thank you" for them; the other hasn't photographed quite-so-well as I had hoped, but in the flesh it looked fab.

Considering all the drama, this Mothers Day ended up as our best yet. Fudged up? I really do not think so.