October 30, 2018
Those of you who follow us on social media - Thank you; those of you who don't. Why don't you?  :) will know that last week I was asked to create a Porsche for a funeral tribute.

Just for future reference if you look to the right of this screen, you'll see some logo's; clicking on any of those will take your through to the social media page they represent - then you can follow us too >>>>>>>.

Anyway; back to the Porsche. I've made a tribute for the same customer previously, so he knew he could trust me to do-my-best for him, which is also why he came back to me this time around. He knew he'd left it a little late to place the order, so we discussed various options, with me agreeing that making one was not a problem, however it would have to be in a 2D style - similar to the alien below. When making one of those, the main image is raised from the base, graduating from the edges to the centre to give it an 'almost' 3D effect, whilst being flat at the same time. 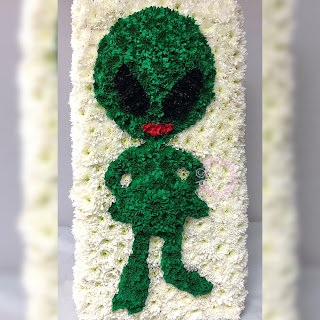 Whenever tasked with any tribute that requires spray painting (Chrysants - which are the flowers we use for based work - only come in White, Yellow, a Pinky/Mauve colour, and occasionally bronze) we add the flower for all the coloured bits the day before. To get the green on the alien with no white showing through took 11 coats of paint. It takes roughly 45 minutes between each layer to allow for drying; when having to do several colours at once, things can get extremely messy (and the smell; oh my, that is not nice).

So, the morning before the funeral service arrived and I stood looking at a 24" square foam base, ready and waiting for me to draw out the Porsche shape onto it. As I grabbed hold of my pen to begin drawing, it struck me that I had time, and enough foam bricks floating about, to make a 3D one instead (which is what the customer really wanted in-the-first-place). And so I began.

At Christmas I buy in pine cones, baubles and all manner of glitzy bits to add to hand tied, baskets and table decorations. These come to me on small wooden canes, similar to the ones you buy in garden centres and hardware stores to stake up your smaller plants. They are always longer than I need, and so I keep what is left, using them to anchor odd bits of foam to each other, and to the bases, when making a 3D tribute.

The hardest part when it comes to carving the shape out, is not the shape itself, but remembering that it needs to have flowers added once cut. So often I'll look at the shape, be chuffed to bits with it (and, being totally, quite proud of myself) only to find I've been a donut and forgotten that it's not going to look the same once the flowers are on; adding them changes the proportions, so at times there can be some bad language thrown around the shop! Depending on the size of the tribute I am making, I will sometimes leave the silver cello I use for where the windows will be, however, for this tribute they were there only for me to keep the shape when it came to adding the flowers. Once the bodywork had been sprayed (8 layers of paint went onto this) the silver came out and I replaced with plain white Chrysant. The reason I didn't/couldn't leave the silver in place is because of the size of the car itself, and the size of the Chrysant; once the flowers were in place they were quite large and the silver ended about 3/4 of an inch from where it should have been. Had the tribute been bigger, or the Chrysant not so thick I would have left it.

All that was left, once it had been sprayed, was to add the finished touches (headlights, wheel trims, wipers and wing mirrors) and then I was able to call it, complete. 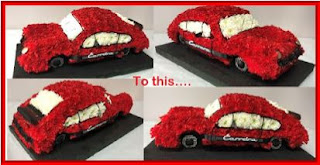 Considering I had never made one before (in fact, I think this was my first ever car) and that I was originally only making it in 2D form, I don't mind admitting I was really pleased with the end result.