March 12, 2018
I got caught out on the amount of flowers I would need for Mothers Day this year - not something I have done before (unless, of course, you include Valentines this year, when I also got 'caught out'). I placed my usual flower order on top of the order I knew I definitely needed for my customers who had placed their own orders, before remembering how good things were in previous years, so I then doubled it; later that evening I added the same (original) amount again, hoping I'd not made a big mistake and was going to end up with a load of flowers left over which couldn't be sold.

I could easily have doubled this total amount again on the Saturday, as I totally got it wrong, for I sold out. Not just by 4pm Friday, but Saturday (by lunchtime) and Sunday before the day even began. I had to turn customers away - something I absolutely hate to do, however I literally only had enough to fulfill the pre-orders I had. Anyone who came in (or called) after lunchtime on Saturday I had to send elsewhere. I did try to get extra for the Sunday as several customers Saturday afternoon had told me the would come back in Sunday morning to see if I'd been able to get what they wanted. In a weird way I am glad I was unable to get hold of any additional flowers though, because those very people never made it back to the shop. Had I got the extra I'd have then been sitting with a shop full of flowers and nobody to sell them to. Thankfully I only had to turn away just 3 people on the Sunday morning - 1 gentleman who I then passed a bit later in the co-op (we did both comment - nicely - and smile inwardly) a lady who wanted to know if we were able to do a delivery for her on the day, and another who wanted a delivery made by lunchtime to an address on the very edge of our delivery area - this person called just after 10.30am expecting us to get it there by 12 noon. I know some people get caught up in daily life and get caught out by how quickly certain days arrive, but giving us just 1.5 hours to get a the flowers made up and delivered on our busiest day of the year, is asking a wee bit too much from anyone. I've said it before, I'll say it again "Miracles we can perform, the impossible takes a wee bit longer" :)

A couple of customers had asked for deliveries by specific times because they had lunches booked, however, as always, no time was guaranteed to anyone, other than that all orders would (hopefully) be delivered by 12 noon (I have a Mum I like to spend time with on the day, both drivers have wives who are mothers so we all want to be away by lunchtime if we can) With 189 drops and 3 drivers it's just not possible to get all orders out first thing. This is where we did disappoint one customer who had phoned around 10.45 to see if I could let them know when their order would be delivered. It was next on the drivers list, however, he was in the wickham/soberton area at the time, with one of those deliveries in the middle of nowhere - the ones where you are giving a house name, postcode (which covers a massive area) and a mobile phone for the recipient who has no reception. You then find there is no name visible on the house meaning you can drive up-and-down the same road for 20 or 30 minutes, knocking on all the doors without a house name hoping it's the right one, or asking whoever answers if they know which house it is we need if it's not them. I told the caller the driver would most likely be 15 minutes, and had he not been caught up behind a tractor and someone loading a horsebox, he would have been, however, he didn't arrive until 11.15 by which time the recipient had gone out. It's not nice when that happens but the drivers are at the mercy of the roads and we all know how it can be when you get caught on a country lane. The customer and recipient are regular customers and have been for many years so hopefully they understood. Their's was the very last drop too, so all those 189 deliveries were completed 45 minutes before the guaranteed final time; I call that a success and cannot thank Chris, Jan and Clive enough for all their effort and hard work. The business doesn't work without them.

After speaking to other florists last night I am seriously considering not delivering on the Sunday next year, instead, sending all orders out throughout the day on the Saturday. That way we would know every Mum has their flowers in time for the day itself, and my drivers don't have to add additional stress to themselves worrying about whether they are going to make a delivery in time - they'd also not have to put up with me phoning and asking "where" they are, or "how long" they are going to be. It's only an idea right now, but it seems to be one which works well, according to a lot of the florists I was chatting with.

As for why I got caught out, I honestly don't know. Being lower down the google list than others (see my previous blog entry for one reason why this is happening) I assumed we would actually be a lot quieter this year, than we have previously been  (I really should take the advice I've been given in the past about "never assuming" anything :) ).  I can't help but wonder if it has something to do with people becoming disillusioned with Interflora, Moonpig and all those other's who just take your money and do very little in return. I did notice both of the above mentioned 'order gatherers' took a right hammering over their poor quality, canceled orders (not canceled a day or 2 before, but actually on the day after they should already have been delivered) and more-often-than-not flowers not even turning up at all. I do feel so sad for the florists though, who are part of the Interflora network. Shop owners like myself, who paid out exorbitant amounts of money to become a member of the network, hoping it would generate business for them while having the backing and support of a multi-national brand. Instead they have been well and truly shafted, for very few shops receive orders from the HQ - instead HQ send out the orders from a central warehouse, in boxes, via couriers (people who do a great job, but who have no idea (or training) for handling flowers). This (along with the costs they demand) is one of the reasons why I never joined them (and why I refuse to join any of the others). Every single hardworking florist this morning who signed up to Interflora has just been tarnished with the same brush; the very company who should be helping to promote their businesses has most likely just killed off quite a few.

I'm sure this is part of the reason I was so much busier. People now use google (other search engines area available) going direct to a local florist, who is independent of these big corporations, because they know it's always about the service and quality. Don't get me wrong; we (I) do get it wrong at times. All of us are only human after all; thankfully those times are far and few between and any mistake I make affects only my business. Because I'm not part of a corporation I am able to apologise in person to whoever has experienced the mistake, and rectify any issues. From what I was reading on twitter (a great place for info on such things) it would appear there weren't many customers out there of other businesses who were able to say the same. These big corporations getting it so badly wrong can only be of benefit to the small businesses like mine as we move forward into the future. I, for one, will definitely try to prepare myself better next year :) 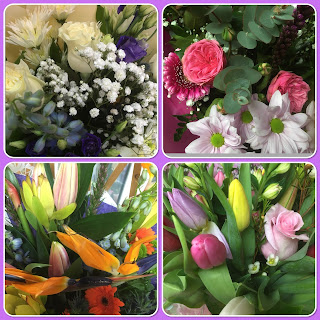