June 14, 2017
Today we received our "end-of-year" figures back from our accountant - we could have had them a lot earlier but I hate paperwork so put it off until the very last minute (it's also hard to find the time when I'm so busy in the shop too - at least that's one excuse I can get away with 😃)

It's always a scary moment opening them up for as much as I can keep a weekly check on how well things are going - very well, thanks for asking 😄 - I'm still never entirely sure what's going on until the accountant gets back to me with just how well the year has been. I'm extremely happy to report that our business has increased by a whopping 10%. Now, to some of you that may not seem a lot but to a small business tucked away on the outskirts of a town as we are, that's a phenomenal amount. Also, when you take into consideration how one of the "big 4" supermarkets was down by 27%, another by 8.2% and shops like M and S over 10% down on profits (although they were up by 2% on sales) it shows what a great year we have had to have gained as much as 10%. Year on year we've grown and as much as some of that is down to us (the work, quality, price and choice) a lot of it is down to you - our customers. You are the ones who come back to us year on year, you are the ones who tell your friends about us; let us also remember that unlike the big boys and some other independent shops we do not advertise anywhere; nobody gets a single penny from us to advertise/promote us. We also do not offer businesses an incentive of any kind to use/promote us. All of the people (and other businesses) who recommend us do so purely because they like the flowers we have provided them with and they deem us worthy of a recommendation. They haven't been offered a single thing to do so.

I know if we had taken up the offer's some of the local funeral directors have made us we could have increased our margins by maybe 50/60% but when they are asking anything from 20 - 40% from us to recommend us to their clients. we refuse their offer; to accept would mean putting our prices up to you (our customers) to cover the amounts we would have to pay them. That is totally unacceptable to us. To let them charge you £100 for something we would charge you £50 for is wrong, for we would only receive £50 from them if they were to take the order from you whilst you are at their offices organising your loved ones funeral. If they were to send you to us we would still have to charge you more to cover the costs they would demand from us for them sending you to us. Thankfully, we have a couple of directors who do recommend us; for doing so they get a "Thank you". Nothing more, nothing less.

A prime example of the costs involved and charges made via funeral directors happened to us recently. We had a family in the shop who were organising some flowers. The funeral director had already told they would sort out the spray for the top of the coffin. Whilst going through everything I talked to them about what they were having and they asked me what I would charge for it. I would have quoted them £120. They were charged £395. My friend's Mum passed away in October of last year. For a garland around the edges of her wicker casket with a few roses they were quoted £280. It cost me (my customer) £62 for the exact same thing. As you can see I'm losing out on quite a bit of business and money by not entering into agreements with funeral directors and other businesses but I could not sleep at night if I knew I was overcharging people for flowers they are not receiving.

We're quite excited about the year ahead now, wondering if we can top our 10%? Wedding bookings are on the rise (so many Tuesday and Wednesday weddings happening these days) and our internet orders seem to be doubling on a daily basis, every day. Don't get me wrong it's not all happiness and sunshine. We still have the odd day (sometimes week) where we're sitting around scratching our heads wondering why we don't have more orders but thankfully those are very few and far between - and we're completely honest sometimes it's not such a bad thing for it means the floors get a scrub and the kitchen gets to look like a kitchen again instead of a dumping ground.

Thank you, all of you who have chosen to trust us with your orders. Without you we would have nothing. 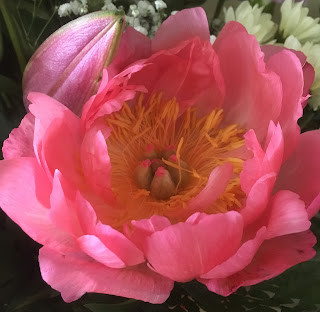