What a busy web we weave

February 24, 2016
My goodness it’s been a while since I found the time to sit down and update this – I can only apologise for my tardiness, while at the same time smiling to myself. The reason I’ve not found time is because the shop has been exceptionally busy and that’s one thing I will never apologise for.

Except for Valentine’s Day that is - although it was really busy for that one stand-alone day - it was slightly quieter than I thought and had planned for it to be. That however, does not bother me one jot, it’s all the ‘normal’ days that keep the shop ticking over, that pay the bills and which keeps the shop here from year to year. Don’t get me wrong, Valentine’s wasn’t quiet according to the true definition of the word – in fact I had to order in another 500 roses for the Sunday morning (I’d bought extra on the Saturday too) but by comparison it wasn’t as busy as some previous years. I like to think it’s because people have finally wisened up to the fact that it is now so over-commercialised that the whole fun and meaning of the day has got lost along the way. I think it’s more that people are buying other gifts. It did give me a warm glow though when I went round 3 supermarkets on the Monday to see they had thousands of roses left – to think they make no money on them in the first place (they can sell them cheaper than we can buy them so they can’t be making anything on them) to have so many left means they actually would have made a massive loss. Maybe they’ll go back to selling groceries, but I doubt that very much. Although flowers can be a loss-leader for them, they bank on the fact that once you are in the shop you will then go on to buy other things which they can make money from. Instead of you spending just £10 on the bunch of flowers as planned, you could end up spending £50 on other bits; these supermarkets are a clever bunch.

Sadly we had to let a couple of customers down, they left it too late for us to be able to supply them; luckily for them though there were other shops who had plenty left that they’d not been able to sell - not sure if they had these left because they over-ordered, or because they just didn’t have enough orders to begin with. For whatever reason though, it meant the customers got what they wanted in the end and that is never a bad thing. I would rather send a customer elsewhere than try to offload them with something that they really don’t want – I find in doing so they nearly always come back to us the next time that they want flowers; I think they appreciate us not trying to fob them off.

I found from a bride-to-be the other day that there is another florist, no names no pack drill, that operates within a 10 mile radius of our shop that appear to be “passing off” my work as their own. Unfortunately I was fully booked for her special day but suggested an alternative florist that was local to her and might be able to help, although I had had no dealings in the past with them so could not recommend them as a supplier. This is where the scam begins - apparently the routine is that a bride-to-be will contact them and will be asked the date of the prospective nuptials. The florist will then check with me as if they are the bride. If we are free they will then make an appointment to meet with the bride to arrange the occasion. The next step is to contact me for a price and forward this price with a suitable margin added to the bride. They seem to be incapable of producing anything other than very basic arrangements (having looked at their website, they actually only show pictures of the sort of thing that I would expect from a first term trainee) nor can they supply the extra bits - table vases, mirrors, etc. I operate somewhat differently in that a bride will always leave the interview with a firm, if verbal, price. It may take me a week or so to confirm it in writing, but at least the bride knows what she is letting herself in for.

I am not sure what they do if I cannot fit the wedding in, possibly they have a few florists that they do this to.

The upshot of this is that I create the arrangements, my drivers deliver them and then set up the reception while this other florist takes all the glory. Now, aside from misleading their (our) bride which I personally think is unethical and morally wrong, they are also passing off my work as their own. If they were using my photo’s they could be fined for breach of copyright, but apparently there is nothing that I can do about it, and even if there was a legal remedy I doubt that the shop could afford it. I can’t decide if I am angered, or flattered – this could explain why I found one of our receptions on a random site once before with a tag attached to this other florist. I just assumed it was because someone had seen it, wanted something similar and thought if they tagged them it was an easy way for them to see what the bride wanted; now I’m not quite so sure. Oh what tangled lives we lead, when first we practice to deceive.

One bride whom was definitely genuine (she brought the chocolates in to me as a Thank You) got married last weekend, and again went for something a bit more different. Still a hand-tied bouquet, but she chose to carry peach germini with blue iris; a combination that worked well. 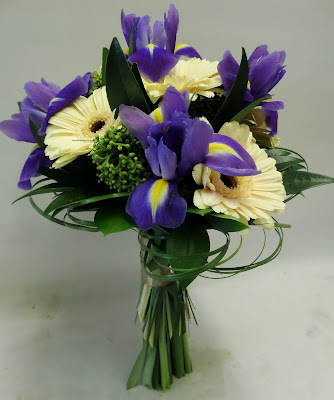