December 14, 2015
Well it's finally happened; 2 years in the making, but yesterday our new website finally went live. If you've not already discovered this via our social media pages (if not, why not?) then you feel free to click on this link and have a nosy round. We are aware there have been a few issues with Apples Safari browser (I use a mac at home so know occasionally it will put the images slightly out of sync - not all the time though for some reason) and we are working on getting it sorted sooner, rather than later. However, judging by the amount of orders we've had through the website this morning, I think we can safely say that you are liking the changes. I even had a call from someone at one of the large florist relay HQ's today who placed an order with me because he said he "liked that I can see what you are capable of". When I asked what he meant, he said so many shops (including the ones he should be using that cover our area, and who are members of his relay service) use generic photos so customers really have no idea if the shop they are using are actually capable of making the items; he knew when he saw ours exactly what we can do.  To who used us rather than one of his own members means so much more than you could imagine.

As always, don't forget to share your feedback with us; whether good or bad we always like to know, so we can make changes if we must, or keep doing what we're doing. Also, please let me know if you spot any spelling mistakes, or missing words; those of you that read this regularly will notice I often forget to add a word, or get the letters of others the wrong way round, where my brain works at a different speed to my typing fingers :) 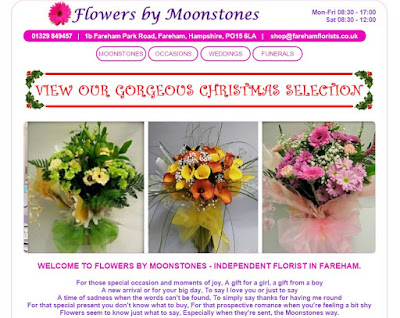 The eagle eyed among you may also have noticed that we also now have a charity bouquet on the website. This is something we have talked about for ages, but never really been able to work out the logistics before but it was something we really wanted to make sure we added when we changed things. As you can see we have started with The Rowans Hospice; if you don't know about the amazing work these wonderful people do, have a read up on them. I've dealt with them personally over the years several times, and they are truly deserving of all the help they can get, and any funds that can be raised for them. Originally we were going to make up a different bouquet each month and nominate a different charity each time also, but because we want to try and raise as many funds as we possibly can, we've decided to make it a quarterly bouquet instead (we're actually doing to follow the seasons of Winter, Spring, Summer and Autumn) so the one for The Rowans Hospice will be on the site until the end of February 2016, at which point we will then donate any money raised to them. Ideally we would like to help as many local charities as is possible, but there will be some national ones added from time to time, if for no other reason that to try and raise awareness of specific illnesses. I may even run a poll each time with a list of different charities and allow you to choose which one you would prefer we help next.

If I don't get here before Christmas (and let's face it, the fact I've made today with this entry is a slight miracle as it's been so busy I've not had time to think) then I/we would like to wish you all a wonderful, happy and healthy Christmas and New Year, and also to thank you, for yet again supporting us. This has been our best year yet; roll on 2016
charity christmas fareham florists flowers live moonstone new year the rowans hospice website