Not as it seems

November 09, 2015
As I'm sure you are aware, sometimes things are not always as they appear to be in life; that works in the world of flowers too.

On the 29th October we were privileged to supply table decorations and presentation bouquets for the local radio station Wave 105 who were having their Cash for Kids awards ceremony. Weeks previously we had discussed the options with their event coordinator (we also made a lovely handtied bouquet that was presented to her for all her hard work) who we sent away with a vase of lilies that she took to the venue to see how well they would work - thankfully they worked well and we got the order. Now, the week before the event another lady came on board and asked if we could add some flowers to the vases, and take away one of the 2 lilies we had planned on using - the wave logo and colour theme is purple and green, so she wanted us to get flowers in those colours which we all thought a great idea. The orchids she requested were quite pricey and wouldn't really have worked in the vases, and she wasn't keen on purple lisi, so they ended up having mollucella (a flowery foliage that I love) with green shamrock chrysant blooms, 1 lily (4 of which in the wrap of 10 opened beautifully, the other 6 went into warm water, central heated rooms, in the shop window as it caught full sunlight, and they were still only just starting to show colour, but by the evening they had thankfully opened enough to give a bit of a show - it's a shame nobody has yet grown a purple or green lily). We also supplied a single green carnation for every guest. We were unable to take photographs ourselves of the flowers on the tables, but the official photographs are on Waves website and can be found here. I have spoken to several people involved on the night and know that the evening was a massive success, which is always lovely to hear. If you would like to know more about their Cash for Kids charity, please click HERE.

The following morning we sent Clive over to collect the vases from the venue, and when he arrived back at the shop late that afternoon I was surprised to find the flowers had been left behind also (usually when we arrange the vases for weddings the brides will remove the flowers and give them to someone else). I have to admit when they came back they were looking a little worse for ware; they'd drunk all the water in their vases, and to get everything in his car Clive had to take them out of what little there was left, and they were kept in his car for almost 6 hours without any kind of moisture on a quite warm day.
He popped the box up on the workbench and uttered the words "I'll chuck those in the compost for you". Now those flowers had come into us on the morning of Wednesday 28th where they'd gone straight into water; the 29th they spent in vases drinking all they could get, and the 30th was the day they were back with me. I knew the wholesaler only supplies us with the best quality, and I know they had been conditioned well before they were sent out, so told him to leave them and I would sort them out - I had a feeling they really just needed a drink. They would never be sold in the shop - aside from the fact they were second hand, they had already passed the 48 limit we have on flowers being for sale, so I took them home. Yesterday morning  (the 8th November) some 10 days after they came back to the shop looking sad and wilting, I took another photo of them.  As you can see they picked up are still going strong :) 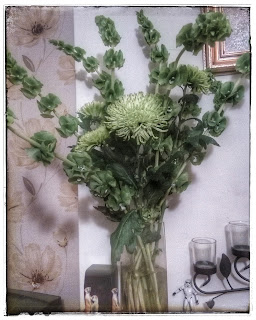 And that just goes to show that things aren't always as they seem, especially with flowers. Sometimes they just need their ends trimmed, and some fresh water.