February 19, 2015
has been and gone (my 29th since I started in the business) and the one just past was the best we've had for many years, which I find quite surprising because of it falling on a weekend (normally most people don't bother with flowers when it falls on a weekend, as they tend to go out and about with their love interest so aren't home for deliveries). It was even more pleasantly surprising for us, as our phone system broke on the Friday (yes it was Friday 13th but I don't believe in the superstition of the day; it was just down to BT and their engineers swapping wires about). Taking out the phone line also took out the PDQ machine, so we had to resort to the old fashioned contraption - I felt so old when one lad told me he'd never seen one before, and another asked if I'd had to visit a museum to find a working one. This meant that all calls had to be forewarded to my mobile; by 10pm on Saturday evening when I was getting drunk calls from lads in pubs that had just remembered they'd forgotten to buy anything, I switched my phone off (as much as I love what I do I also have a point where I say enough is enough).

As with previous years I bought Red Naomi roses - these have proved to me many times over the years that they are worth the expense, as the buds alone are bigger heads than most normal roses when fully open; they last exceptionally well too if they are looked after as they should be.  A couple of people questioned me over the price (as they do every year) but when I was able to show them a rose from one of the leading supermarkets (who were using the same variety as most of the big stores/card companies, who have massive adverising budgets, that have decided to sell flowers) they soon realised that the saying "you get what you pay for" is true, and chose our roses over those selling cheaper (I can only imagine what the ones were like from a well known supermarket that were selling 18 for only £10). As you can see from the picture below, there is a big difference in quality and size; the one on the left was from a £25 for a dozen bunch (it wasn't even made into a bouquet; the roses were just shoved - literally shoved - into a cellophane sleeve) the one on the right is from our £45 for a dozen, handtied bouquet that was delivered in water - see the 2nd picture. 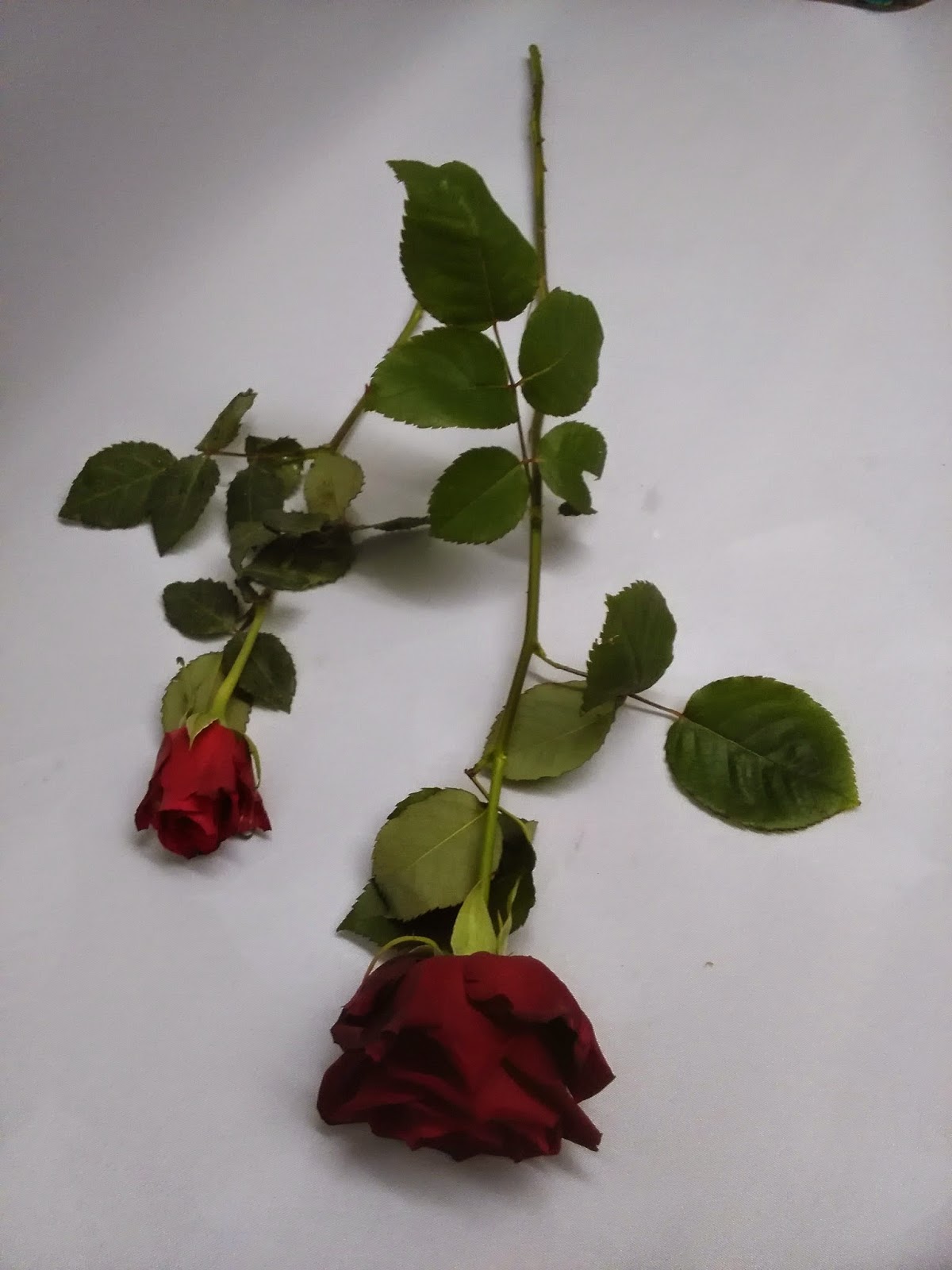 Another massive advantage we have over the supermarkets, department stores, online card retailers and anyone else offering them, is that our deliveries are made by one of us (they are not shoved into boxes where they could fall over, and where the flowers can get damaged as they are removed from the boxes - from us they arrive to you exactly as they leave the shop) and the flowers are made (again by us, in the shop) on the morning of the delivery. For personal delivery we charge just £3.50. The other retailers were charging anywhere from £9.99 to £19.99 to deliver their roses; in order for those to arrive on the day they would have been sent out to the couriers/mail companies on the Tuesday or Wednesday before, using roses that had most likely arrived at the warehouses they use to make them up on the Saturday (possibly even the Thursday or Friday before). This means by the time the flowers arrive with the recipient (I can only imagine the state some of them must have been in when they arrived, having spent days in a box at a dispatch centre) they could already have been anywhere between 10 - 15 days old. Our roses came in the morning we needed them; our wholesalers had them flown in direct from the growers the evening before we recieved them. They literally were as fresh as we could possibly get them.

So you can imagine my dismay and anger when watching Casualty on Saturday evening and one of the charactors stated that "Valentines Day was just an excuse for Restaurants and Florists to hike up their prices to rip people off". As someone forced to pay my TV license I think the BBC need to look at who is ripping off who, but that's a matter for me (and all other florists) to take up with them. The reason I mentioned is to let you see the prejudice we have to deal with for a day that most of don't even agree with.

Did I rip anyone off? Absolutely not; in fact I try to talk my customers out of having roses, because I lose money on every rose order that's sent out. If I was to try and make any kind of profit on them I'd have to charge about £75 for a dozen and there is no way I could do that, so (as a business) we absorb the costs to ensure our customers are getting what they require at a price that is as reasonable as we can possibly make them.
bbc casualty fareham florist florists flowers moonstones red roses rip off valentines Valentines Day