August 07, 2013
So, on Saturday we finally let our Becky out (to play?) so she could help Clive in the set up of one of our 4 weddings (yes it was a mighty busy weekend).  It was the first time we have let her venture further than the shops over the road (other than for important things like coffee and cakes - or the odd delivery that's within walking distance).

Normally I would have started her off with something simple - carrying some arrangements into church/reception and sitting them on their stands - but being so busy I has no choice but to throw her in the deep end (she did have Clive with her so she wasn't completely alone) and I sent her off to Southampton to hang garlands and tied bunches from beams (she'd pre-made these before she left which helped) in the Merchants Hall - there was an arrangement for the registrars table too, but that was a matter of carrying it in and placing it on the table that was already set up.


She was then handed a roll (or 2) of organza, some thin wires,  a pair of scissors, and  was told to " go and do something with the railings outside the hall". If you look closely you can just see her arm at the very top right of the photo :) 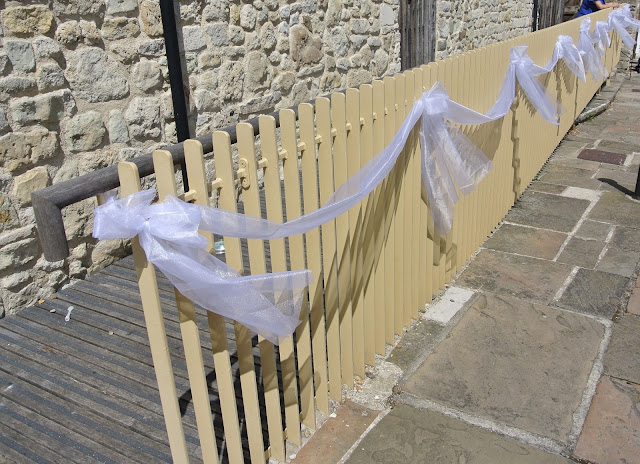 After leaving the hall she was then sent down to Ocean Village and the Princess Caroline ship where the reception was to be held that evening - apparently the constant bobbing and dipping made her a bit odd (but she's odd on her own anyway so this was nothing to worry about :) ).  Here she was tasked with attaching a foliage garland with organza trailing bows, to the gangway from the pontoon to the ship itself... 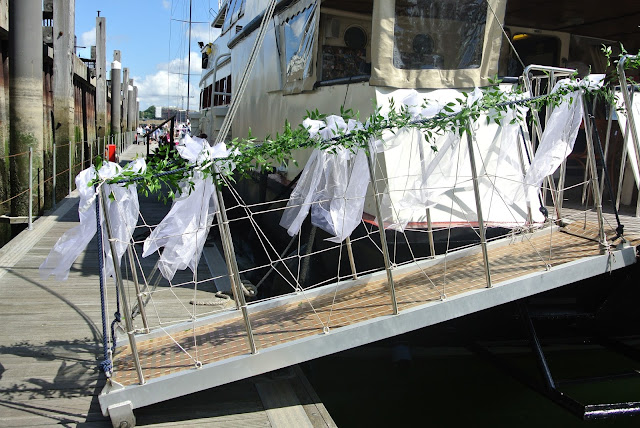 The railings around the outside balcony also had an organza garland (draped on both sides) with bows for decoration, but it was inside that the hardest part of the day trip was to be for her. There are 2 pillars inside that had to have foliage draped round them with gerberas and rope attached to them; because of not knowing the sizes these had to be made from scratch on board, but I think you'll agree she did a great job? 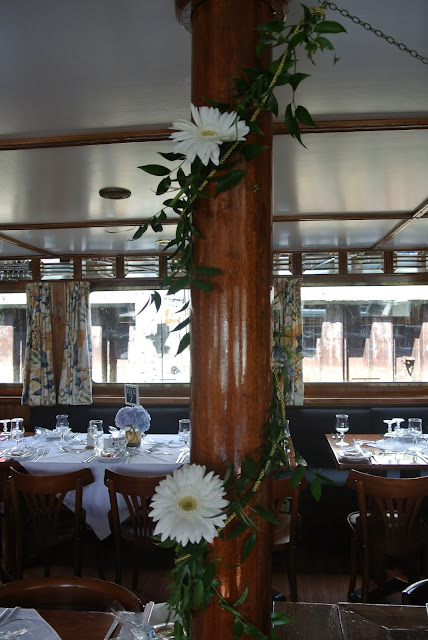 The hardest part of the whole set up (other than having to put up with Clive for a couple of hours) was what most people would assume would be the easiest thing; the placing of 2 Hydrangea heads in a jam jar. Now while this may sound easy, one of the worst things with hydrangeas is that their heads are too big for their stems. This isn't a problem if you are standing them in a tall vase, but in jam jars you have very little depth so it can be a bit of a balancing act to get the stem to stay in the water, while stopping the flower head from dragging the whole thing out of the jar; also the bride had told me the day before that the sand they had put in the jars (the jam jars were the brides own) was turning the water a dirty yellow shade if it was disturbed (even slightly). As you can see by the photo the jar on the table behind was disturbed and the water doesn't look that nice; however, the good news is that by the time Becky and Clive left the water had re-settled and was crystal clear again.

I have to say between them they did a great job, and any set up we send her out on from now will be a "piece of cake" for her. Bring on this weekend.
florist flowers Merchants Hall moonstones Ocean Village Princess Caroline Southampton weddings West Gate Hall