Ooh what to do?


Actually I already know what to do but I thought I would share with you a conversation I had yesterday.

Recently we have been taking more and more orders to be delivered to a specific funeral director - actually we send to lots but I do know this particular one is tied in with a florist (a bit like the Co-op who have their own florist shops dotted about the country specifically tailored with their own directors in mind,  but this particular director has a *deal* with an independent shop rather than one he has to be affiliated with)  I find it so sad that shops are now only recommended because an MD somewhere says they have to be, or because of financial deals that have been made and that pass between florist shops and directors. I know whatever happened to people being recommended on the merit of their work?

Anyway; this director obviously realised that the people he is sending to his recommended florist aren't taking any notice of him and are using other shops in the area - ours being one of them, so they decided to contact us yesterday. Now I will admit I get quite annoyed with funeral directors and how they try to harry a customer into things; I personally feel they take advantage at the most vulnerable of times and that in my book is really not one. Sadly having to organise (and help organise) funerals of people close to me I have seen first hand how a lot of the directors operate and to be honest if I hadn't been there with the family members at the time, they could easily have ended up paying out thousands more than they needed to. All of the directors I have dealt with when it comes to organising have tried to talk the relations into getting flowers through themselves; the costs? Well one family member was quoted £450 for something that I made for £175 (and no I don't do mates rates; at the end of the day we keep our costs low enough for all and it would be wrong of me to charge a friend less than I would charge one of our customers). Now I know that some shops have higher overheads than I do (their rent, council tax etc is more expensive) but even so we ALL use the same wholesalers so are paying the same prices, and a £225 difference in both our prices left me absolutely flabberghasted.  However, having taken the call from the Funeral Director yesterday I can fully understand why.

The director told me that he wasn't happy with the shop he was recommending (now in the real world you would believe this meant he was recommending them on their work merit and that they had let him down on the style/quality) but no; what he meant was that the shop he recommends weren't getting as many orders (I guess because we are getting so many more) and so he wanted to know if I was willing to be his recommended shop. Now who doesn't want that? In these economic times all business is more than welcome; but at what cost? Call me a cynic if you wish but the first thought that run through my head was "how much is this going to cost" because alas I have been in this business long enough and know full well that you don't get anything for nothing. I know from some previous shops that I've worked in that for every order the shop got from the FD they paid him 20% of the total costs. They put their prices up to cover this which I thought was wrong; if the customer went to them and didn't mention the director they get everything 20% cheaper, but when the FD was mentioned they paid more; how is that ever fair? As it turns out that was the *norm* for such arrangements between shops and directors. To me the shop should have absorbed that cost themselves for all the extra work that was put their way, but then that's just my opinion (I'd hate to think I was ripping anyone off at the best of times but even more so when it comes to a funeral; I could NEVER take advantage of people at such a delicate time).

So how much did the director that contacted me want? 20%? 25%? 30% even at a push? Oh no; they wanted 45% because that's how much the shop they currently recommend is paying them. Now I'm not sure if I am shocked at a shop giving away this much (of course they charge their customers this amount so it no loss to them) or if I feel sorry for them that they are that desperate for business they are willing to pay to get orders. Of course my answer was NO. I don't pay for any advertising as it is but I am certainly not going to pay money to someone just because they have sent a customer to me who has placed an order. In fact the thought of doing so fills me with disgust. I would have said no even if they had only asked for 5%. I am not willing to pay anyone to recommend me (and I certainly wouldn't want customers to be taken advantage of when they already have enough to be dealing with).

Yes about 80% of my customers are recommended to come to me; by everyday people that I've not had to pay a penny to. They come to me because of the service they receive; because of the quality they receive and because I set my prices at levels they can afford. I don't (never have and never will) pay anyone to send customers to me and to be quite honest I think it's a real blot on our industry for any shop to agree to do so. Don't get me wrong; if a director was to keep sending customers my way because my work merited his recommendation then I might buy him a large box of chocs at Christmas as a thank you, but that would be it.

So next time you are in the sad situation of having to deal with a funeral director please don't let them push you into anything. I know it's easy to let them sort the flowers out for you and it gets included in the cost but for that £400 you spend, they will could be getting £180 just for taking the order off you to pass on to someone that may not even be qualified or completely capable of making the item you require; they could just be the person that offered the highest percentage which won them the right to get your order and your money. 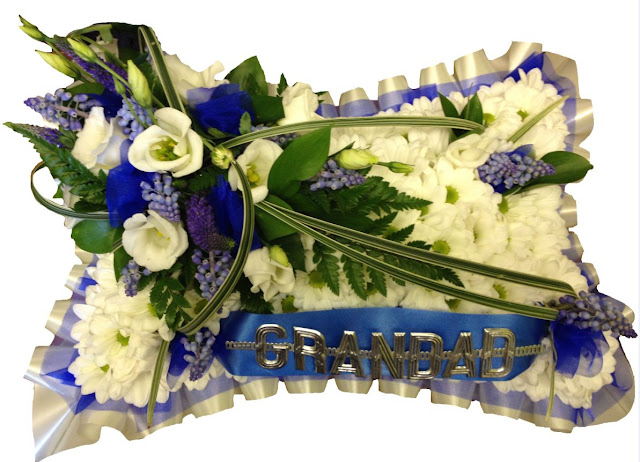