was the date; the big one. The wedding of the year. EVERY wedding is important to us and we always give 110% (and often more) to our lovely bride and grooms (bride and brides; groom and grooms too) big day, but when it was one of our own the pressure was really on.

Many hours were spent discussing the colour scheme for the flowers; I wanted to go down one route so I could tie everything in with the brides gorgeous dress; Emma wanted to go down a different route after a conversation with her photographer about bright colours. Finally we agreed on a compromise - she allowed me to add a rose to the mix that I knew would tie in perfectly, and I allowed her to have the colours she wanted; everything was set. All they had to do was sit back and let me get on with it. All I had to do was try and get some sleep the night before so I was ready to and awake enough to make it all :O)  I have to admit between us I think we got it spot on.

After the final decision was made the bouquet ended up like....  (see photo below) 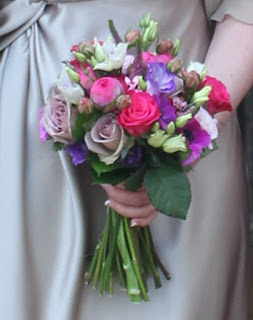 As you can see the bright colours worked perfectly against the dress colour, with the amnesia bringing all the different tones and hues together..

That's how it works with a bride and her florist. We both have ideas that we bounce around between us, but the end result is always as it should be. A beautiful bride, gorgeous flowers and a great day for all involved.  There are times we have to warn our brides about certain flowers - hydrangeas being one of the most warned about; they are a beautiful flower but they like to be in water. So often a bride will want them in her bouquet, which I (and I am sure all other florists) are willing to do; however, because they like so much water sometimes in less than an hour being out of a water a hydrangea will begin to wilt and curl in on itself resulting in a bride walking down the aisle with a screwed up tied bunch of nothing. Other times they may behave perfectly and last long enough to get the bride to the reception. Annoyingly bridal magazines will use them so often in their shoots making them appear a perfect flower for the big day; what they don't tell you is how the flowers are kept in water until just before the photographs are taken, so they will always be looking their best. I advise all brides of this and several have decided to take the risk; only 1 of 9 that I know of actually had their hydrangeas last long enough for decent photos'. The other 8 came back and told me they wish they had taken my advice on board.

Anyway; back to our Clive and Emma's big day. As it turned out using the brighter colours worked perfectly in the wedding room where they were married, and had their evening meal. As with most weddings the arrangement that was placed on the registrars table, was then transfered to the head table for the meal. This really only works if you are marrying in the same place as the reception, although we have been known to remove flowers from churches and wedding venues before taking them on to the place of reception to help keep costs down, but also to stop flowers going to waste.

The room they got married in is beautiful and had several window sills in it. We discussed many different options for these. Being beautiful windows in themselves they could have been left as is; another option was candles with ivy trailing. We ended up with arrangements that had ivy trails and they put candles either side of them. I hadn't seen the room and had no idea what sizes to make the arrangements in but pulling on experience and other window sills I've made in the past I went in between a small and large and when I saw the photographs of the place the next day it appears my judgement wasn't too bad at all.

The hotel they were married in also organise a couple of pedestal arrangements which is included in the wedding package, so Emma passed on to them the flowers and colours I was using for everything so they could use the same colours/flowers in the ones they provide. They didn't get it quite right, but they did a fairly good job and as a  backdrop to their register signing photographs they worked really well.

So Emma and Clive; from all of us massive Congratulations and wishing you both a lifetime of happiness.

Oh and if you are reading this.. Where's my piece of cake??